x
“UK Biker sets speed camera on fire”
Vídeo publicado en YouTube el 11/02/2012 por Izznogoudatall
[Inglaterra]
“Road rage? Necklace a speed camera!”
Artículo publicado en IOL SciTech el 18/02/2004
[…] Vandals have burnt, pushed over, sawn down and even shot at most of the speed cameras that line the A37 through the rolling hills of Somerset in south-western England.
Recently one was blown up at a crossroads near the village of Emborough. Astonished police officers arriving at the scene cordoned off the area and called in the bomb squad.
More typically the cameras are necklaced with an old car tyre filled with petrol placed around them and set alight. […]
“We’re MAD as hell…”
Artículo publicado en The Independent el 27/04/2004
[…] “It goes,” says Captain Gatso, “from very low-level criminal damage: stickers or spray-paint on the lenses. Then ‘necklacing’, which is a tyre filled with petrol,” which is then hung over the camera box and set alight. “Then there’s ‘decapitation’ [where the camera is felled with an angle-grinder], or a vehicle reversing into it to knock it over. Then there’s shotguns and things like that, up to e-x-p-l-o-s-i-v-e-s,” he says, spelling the word out. […] 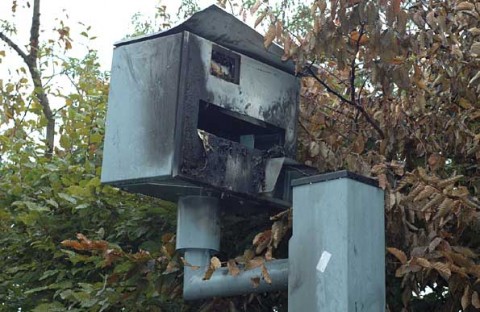 “Captain Gatso Denies Letter Bombing”
Artículo publicado en BSD – The Detector el 09/02/2007
[…] MAD have been responsible for the destruction of over 700 Gatso tax cameras, using explosives, incendiary devices and shotguns. A generally popular campaign amongst hard pressed and grossly over-taxed British motorists, the MAD bombing campaign has so far not placed any individual in danger, some even claim that they have saved lives by destroying tax cameras that have contributed to increased road accidents. […]